Trail cameras can be extremely useful products for seeing great images and getting closer to nature than we would usually be able to. However, sometimes, for whatever reason, the fates align and you get some extra strange pictures. This is especially true when it comes to nightvision cameras .........

Top 10 Strangest Things Captured on Night Vision Camera
Trail cameras can be extremely useful products for seeing great images and getting closer to nature than we would usually be able to. However, sometimes, for whatever reason, the fates align and you get some extra strange pictures. This is especially true when it comes to nightvision cameras - for whatever reason, things are definitely weirder at night, and maybe there’s a reason you were told not to go into the woods alone!

Here are the top 10 strangest things ever captured on night vision trail cams:

Number 10.
Here we go with the first entry. The list starts off quite weird, but at least things haven’t got too disturbing yet. Maybe this racoon is just catching a ride, maybe he’s optimistically decided he can take on this huge boar in a fight. Perhaps the two of them are even friends, and this is a regular occurrence. Whichever way you look at it, though, this picture raises a lot of questions. The two of them could be a crime fighting duo, solving mysteries around the forest. Or, it could just be a very well-timed photo, and following this the two parted ways forever. We’ll never know. 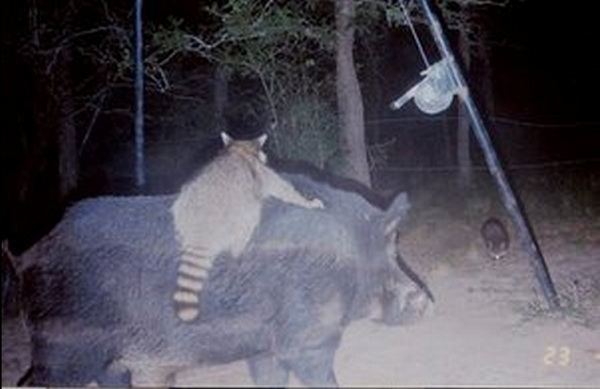 Number 9.
Things have started to get a little bit freaky now we’ve got to number nine. Sure, it could just be a slightly pale kid who doesn’t go out in the sun much, but it sure looks like this guy is not of this mortal world. What is he doing outside at this hour on his own? Going for a little night time stroll, or searching for a new victim to possess and/or haunt? It’s times like these that we’re glad we use trail cameras rather than waiting outside ourselves. He’s probably just a harmless child...but we still don’t want to risk it. On to number eight! 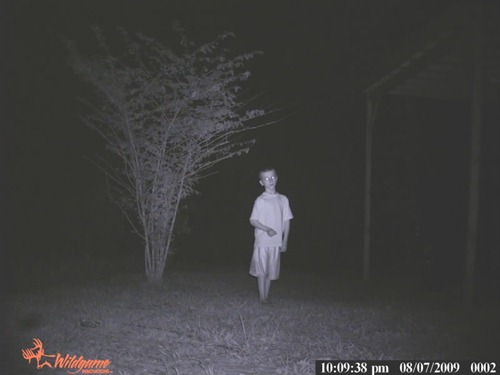 Number 8.
This picture feels like everyone who views it is intruding on something that is intensely private, intensely creepy, and should be left well alone. Now the ritual has been completed and the sacrifice made, we’re all in trouble. We’re not sure what it means, but it can’t be good for the human race in general, and we’d hazard a guess that anyone who has seen this image is potentially in danger (sorry). These deer are definitely up to something, and perhaps the food chain might not look the same way for much longer. Next time you’re out in the woods, be wary of the sound of hooves behind you… 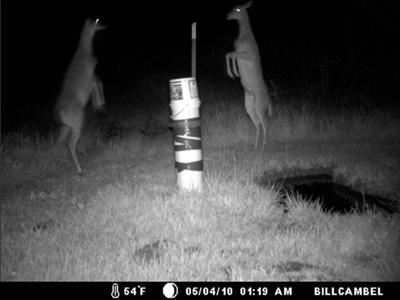 Number 7.
The racoon from number 10 is back, and this time he’s up against an even tougher adversary and hasn’t got his friend to help. On the other hand, maybe he already disposed of the pig and his appetite for blood hasn’t been fully sated yet. After the occult ritual of number eight, the deer now have a supernatural champion, and he looks like he has hate in his heart for small mammals. As it turns out, we needn’t have worried too much about the raccoon. Shortly after this picture was taken, he was found gnawing on a large set of antlers, looking very satisfied… 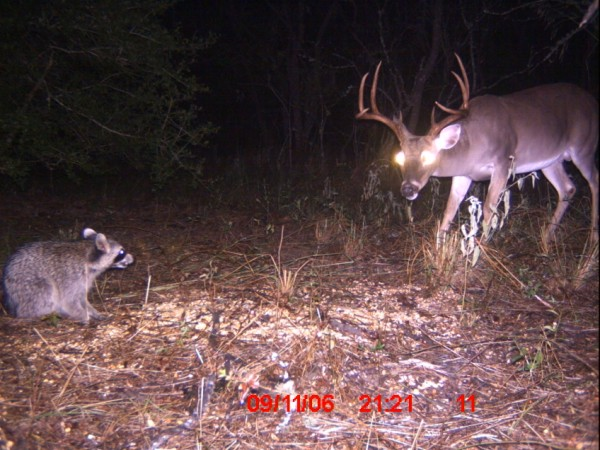 Number 6.
We’re beginning to think that nightvision cameras maybe aren’t the best idea if you want to keep your sanity, so maybe it’s time for something a little more touching and light-hearted. These two porcupines are clearly sharing a tender moment together. Dave went on his gap year to Southeast Asia, and they were forced to skype every few nights, but nothing matches the moment the two were reunited. Barbara has prepared him his favourite dish of twig casserole, and the two are about to spend an enjoyable evening reacquainting themselves with one another. Love is truly still alive and well in the rodent world. 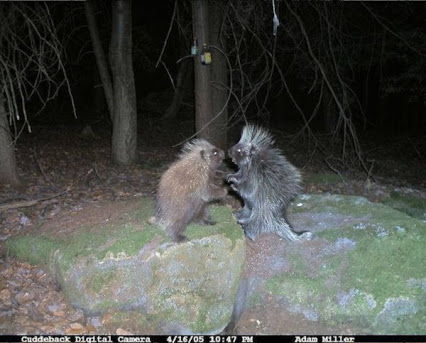 Number 5.
There was briefly harmony in the forest, but here at number five we’re back to all out war between the species. This time, we’ve got the battle of the century - deer vs flying squirrel. In the blue corner, we’ve got the deer. Not really built for fighting, with small antlers and strong hind legs its only real form of defence. In the red corner, we have the flying squirrel. It can get some good speed going if the wind is right, but based on size and lack of anything resembling weapons you’d have to think it’s the underdog here. The deer doesn’t seem to concerned either; after all, there are probably some raccoons around that are a more pressing concern. 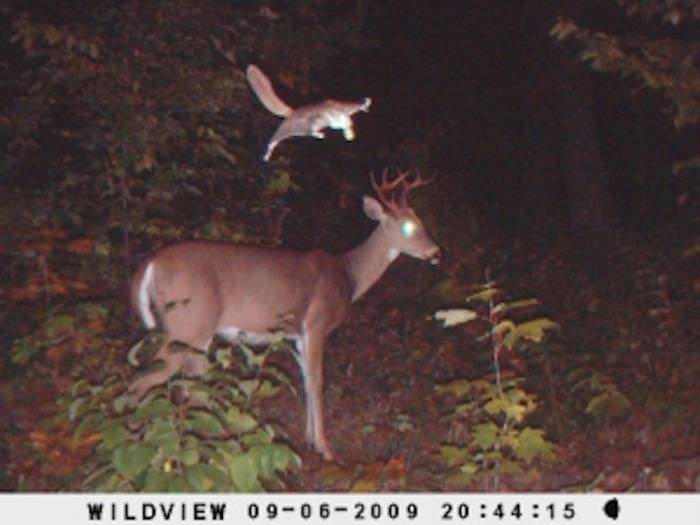 Number 4.
We would ask why a child is out there alone in the woods in the middle of the night, but in truth we’re more worried about those deer. It’s really not looking like the deer are getting dealt a great hand in life, what with the raccoons, squirrels and ghost children that they have to deal with on a daily basis. “Can you believe this?” the big buck seems to be saying to the camera. He’s already given up hope for his wife in the background, and it’s every deer for himself at this point. Maybe he’ll finally move to the city and live out his dream of becoming a coat stand. 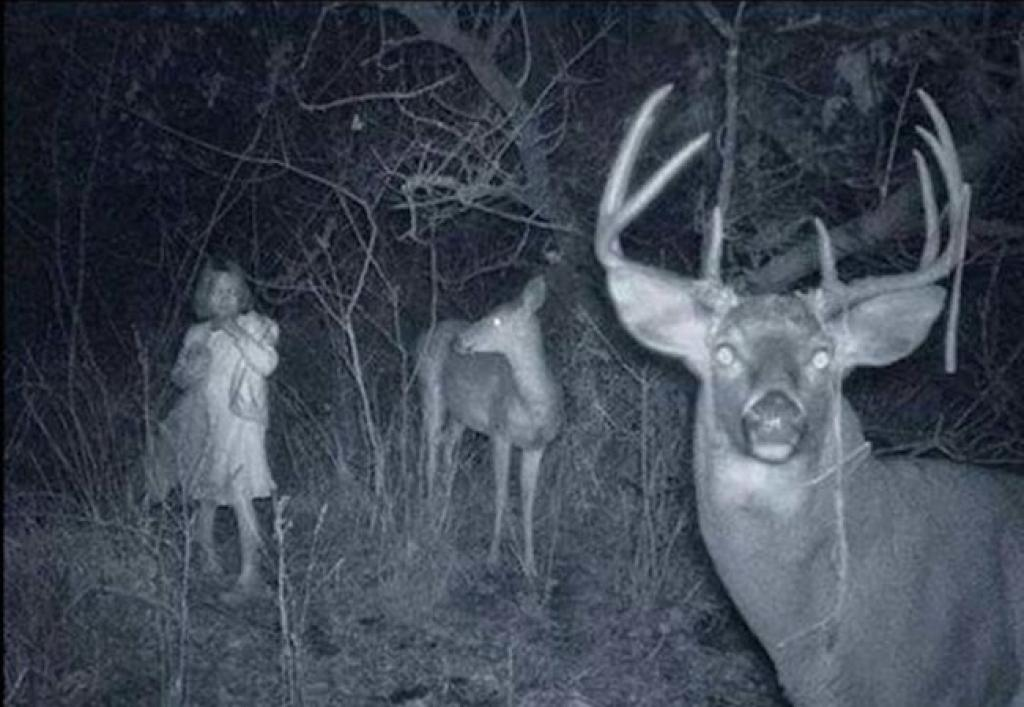 Number 3.
So the legends were true! Bigfoot, Sasquatch, whatever you want to call him, this is indisputable (probably) evidence that he is alive and well. In all seriousness, though, what is this? We’re not sure what this semi humanoid-looking creature is, and why it’s scuttling around the forest. Maybe it’s an escaped chimpanzee from the nearest zoo, or some sort of human/chimp hybrid?  On the other hand, it could just be a skinny looking bear who hasn’t had a good meal in a few days. Yeah, that’s probably the most likely explanation. We all know Bigfoot isn’t real, don’t we…? 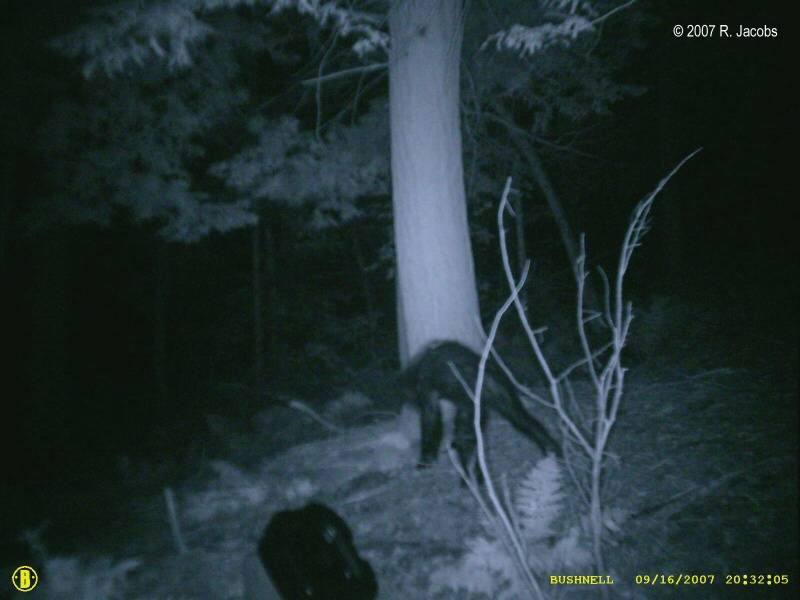 Number 2.
Another spine-tingling entry here. Apparently the food isn’t too good in hell, because this demon has come up to earth for a snack, and this unfortunate deer looks to be on the menu. It might be fast, but it hasn’t got wings so our money is on the demon. We’re not sure what this means for the human race in general, but it can’t be good. Of course, for a counter argument it could be suggested that demons aren’t real and this image has been modified somehow. That would be the more likely (and comforting) explanation, but we’ll think twice before heading out alone at night anyway. 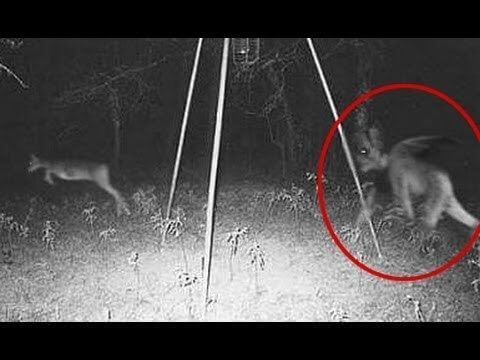 Number 1.
And so we come to number one. It’s a tough decision, but we think we’ve found a worthy winner. “See anything good on tv last night?” the deer in the middle asks, trying to ignore what’s going on to the left of screen. “Actually, I watched this documentary on killer raccoons. Really eye-opening stuff you know.” Deidre is having the time of her life dancing on her own, and she doesn’t care who’s watching. The others are so used to these antics they don’t even bother looking at her - it’ll only encourage her. A worthy winner for pure timing and strangeness. (and because it’s real). 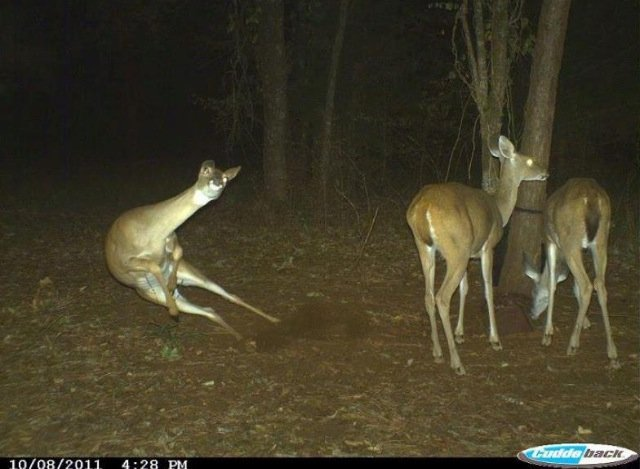 So, apart from scarring you for life, we hope that this list has showed you just how great the images you can capture on nightvision cameras are. You never know what you’re going to get when you set up your trail camera, and it shows you how animals act when you’re not around. If you’re now scared of the woods, don’t worry - you can set up your camera in the daytime, before all this strangeness occurs! If you want to get images like this yourself, why not have a browse of our trail cameras? We’ve got models that can give you crystal clear images even at night, and who knows, you might even get a better picture than one of these. Luckily, we are just the place that you can pick up high quality trail cameras that’ll give you a shot of making the cut the next time we do this kind of list!