Trail cameras are very versatile and can have a lot of uses, but you may not have realised just how useful they can be within a law enforcement setting, and the results they can get catching criminals and preventing further crime.........

How Police Trail Cameras Captured One Of Australia?s Most Elusive Fugitives
Trail cameras are very versatile and can have a lot of uses, but you may not have realised just how useful they can be within a law enforcement setting, and the results they can get catching criminals and preventing further crime. One case in particular, that of Malcolm Naden, stands as testament to the usefulness of these trail cameras.

The Story
Malcolm Naden was a fugitive from the law, who gained infamy within Australia and even around the world as he hid from police for several years, from June 2005 - March 2012. Naden was charged with the 2005 murder of a 24-year-old woman, and aggravated indecent assault on a 15-year-old girl. The murder of a second woman would also come to light later. During his extensive time on the run he was the most wanted man in New South Wales, and when he was finally found it made the international news. Naden managed to evade capture for so long by hiding out in the bushland of NSW, but his eventual capture and imprisonment had a lot to do with the cameras that captured him and alerted police to his whereabouts.

The Myth
It?s hard to see where the truth ends and the legend begins with regard to the case, and during his time on the run, Naden earned a reputation as a sort of expert survivalist, who could disappear into the wilderness in seconds, and live off the land with ease, eating nuts and berries and hunting kangaroos then eating them raw. Stories even emerged that he allegedly lived in the lion?s den of the Western Plains Zoo. Some even came to see Naden as some kind of folk hero, forgetting the crimes he committed and his volatile nature. Rewards for his capture started at $50000 and would double, but all to no avail.
?
In reality, though, many stories were exaggerated or flat-out made up. The reason he managed to stay on the run for so long was simply because of the terrain and the difficulty of pinpointing his location. Naden had been wandering around, breaking into any properties he came across, and the supposed bush skills he possessed were nowhere to be seen. The turning point would be when he was captured by remote cameras set up by the police, leading to his actual capture shortly after.
?

The Role of Trail Cameras
New South Wales is a big place, and there is lots of bushland for people like Naden to hide out in if they need to. Being a loner, he didn?t need much contact with people either. These are some of the reasons he managed to evade capture for so long, and why the legends began to spring up about this mystical character. The man himself was very real though, and this was shown when he was captured on a hidden police camera rigged up in the NSW bush, as shown in the picture below. 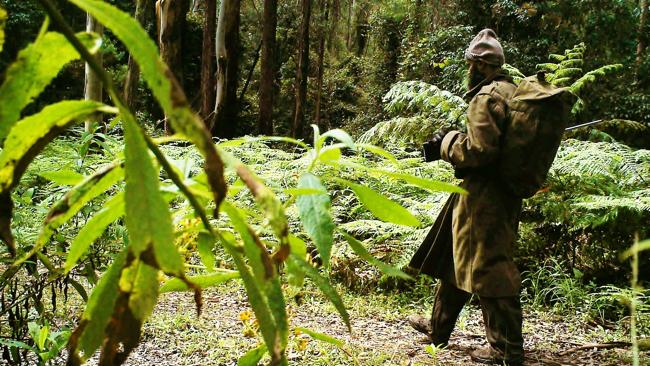 This image shows Naden walking through the dense NSW forest, rifle in hand and kitted out in camouflage gear. After disappearing for so long, the clever use of this security camera helped bring him back to the attention of police, and led to his capture. Even with the cameras in place, police couldn?t believe he had strayed so close to them, but they were grateful for the strategic placement that helped pin down the fugitive?s location. Another image of the fugitive, the hidden police cameras capture Malcolm John Naden in the bush near Gloucester.

These trail cameras could well have been the difference between Naden being captured and staying on the run for an extended period. His illusive nature, coupled with the remote areas he frequented, meant that police described the search as ?almost like looking for a ghost.? ?After Naden was snapped by this camera, he was soon arrested nearby to the location he was initially spotted, demonstrating just how important the role of the trail camera was in his capture. In 2013, he was sentenced to life without parole for the murders of Kristy Scholes and Lateesha Nolan, and the attempted murder of a police officer who was shot during the search for the fugitive. ?
?

What Makes a Good Police Camera?
The convenient nature of a remote security camera means you obviously don?t need to actually be present to see anything, or anyone, that comes into contact with it. If a police force is stretched thin in terms of resources, then it makes sense to use remote surveillance options rather than send officers out into the field when they could be put to better use elsewhere. That way, when the camera is triggered, it will send notification extremely quickly - certainly an important factor if you have to quickly mobilise your officers to search for a fugitive such as Naden.

Our police/security cameras boast a number of features that make them ideally suited to the task. One is, of course, high quality images. No matter what time of day or night, you need lots of megapixels to ensure a clear image every time that allows you to identify a suspect. A wide field of view and a quick trigger time are also essential; you don?t want a criminal to get away unscathed because they walked just out of view, or left the site of the camera too quickly for it to react to the stimulus and take a picture. The look of your trail camera also plays a part, since you don?t want a fugitive spotting your camera from a distance and avoiding it. Many of the cameras in our range feature camouflage designs, to ensure that they blend in with their environment. Overall, they have been perfectly designed for covert surveillance, and their robust design means they?ll stand the test of time.
?

Get a Police/Security Camera Here
Now you?ve seen just how useful trail cameras can be, why not head over to the site and see which models will suit your requirements? Our excellent range of hunting trail cameras may be designed to catch great footage of animals, but they work just as well catching criminals! If you want something a bit more specific, our Special Ops Cameras are perfect for surveillance and covert investigations, meaning they?ll greatly benefit the law enforcement process if used for such a purpose. We boast a great range of some of the finest brands around, with competitive pricing and excellent services. Our staff are experts in matching you up with the perfect camera to suit your needs, so if you need a hand just contact us and we?ll be happy to help.